Before I write this, I want everyone to know every word is TRUE! The sad thing is, this is only one story of many I could tell.

My name is Jill. I am the middle child of three girls. My sisters and I are close. We had to be close growing up. Mom was a little hard to deal with when we were kids. It wasn’t until recently, that we have started to understand mom’s behavior as we grew-up.

Growing up, I worshiped my older sister. I followed her everywhere. I didn’t let her out of my sight for long. When I started my cycle, 2 weeks after Sandy, mom started telling everyone; “Jill never could let Sandy do anything by herself.” I was eight years old and Sandy was 11. At this point, Kristie was young enough not to care about anything her older sisters and what they were doing. She was too busy growing up.

We grew up in a small town in the days when it was OK to leave kids at the movies, mall (actually I’m not sure we had a local mall yet), or skating rink without grown-up supervision. When mom and dad left us on our own, Sandy took on the role of protector. She watched Kristie and I like a hawk. She wasn’t going to be in charge if something happened.

An unbelievable incident occurred while we were at the local skating rink. The incident slowly evolved from some bigger kids picking on Kristie. She was wearing a tube top, one of the older girls grabbed by the shoulders and dug her finger nails in, to the point of bringing blood from the scratches, left across her shoulders.

Kristie immediately ran to Sandy and pointed the girls out to her. Sandy told the Security Guard, who had a talk with the girls. Which apparently did not a bit of good, because they ran to their mother’s. Their mother’s proceeded to corner Sandy and threaten her.

When mom arrived, Sandy told her the story. You could see mom’s switch flip from cool, calm and collected;  to do not mess with my kids. Sandy pointed everyone out to mom. The security guard realized mom had arrived and he proceeded to attempt to talk her out of saying anything.

Mom went to talk to the older girls. They ran to their mothers. When their mothers confronted our mother, the security guard called the police. I am not sure how to describe the other women involved, politely. They were like no other women I had seen in my lifetime. This was the first time I ever realized women could actually shave their eyebrows and paint them back on. Not a look I care for.

A crowd started to form around the car my mom leaned into to discuss the situation. She must have said something the women in the car didn’t like because they sell got out of the car, came around and surrounded mom.

The driver of the car, pushed mom backwards. Mom got up fighting. She jumped the driver. The next thing we knew mom and the driver were rolling around on the ground and the other women were landing punches as they could. The crowd was wild.

Before the fight was in full swing, the Security Guard called the police. We could here the sirens getting closer in the background. The police arrived, they attempted to stop the fight and desperate everyone. All I could see of the fight was fists and hair flying. At one point, I watched my mother grab the Security Guard and tell him to leave her alone if he didn’t want to loose what she was grabbing.

The police finally separated the fight and attempted to sort out what happened. I do not remember much after this, because our father had been contacted to pick us up. We were taken home and sent to bed. When we got up the next day, mom was home and the previous night was not mentioned.

I have a relationship with my sisters that others have trouble understanding. Maybe it has something to do with our childhood. We went through a lot together.

Libor, Kristie’s husband, states that he has never seen siblings get along so well together or exhibit the closeness we do concerning one another.

When Barry and I were married, it took him ages to get used to our relationship. He became a little upset with me once when he overheard a conversation between my oldest sister and myself. He felt I should have been asking him the kind of questions, he heard me asking Sandy.

I tried to explain that I’ve been depending on my sisters for advice on certain topics since I was a kid. He grew up an only child, not knowing what it is like to have a closeness with a sibling. As time goes by, he grows closer to understanding our relationship.

You have friendship, brotherhood, and many other words to describe a kinship between people. If you do not know or understand what it means to be a sister, you do not know what you are missing.

Sisters are a different breed. We interact with one another on a different level than brothers and friends do. We know each others deep, dark secrets. We ask and answer each other questions you’d have trouble asking you husband or closest friend.

You can count on your sisters to always be open and honest with you. When you get sick, your sister will be there to do whatever needs to be done. Part of being a sister, is being able to tell your sister when they are being complete turds and need to remember there are other people in this world than themselves.

Everyone has busy full lives today, you can’t shuck off your responsibilities to suit your needs. Once a sister, always a sister. Once a daughter, always a daughter. There are a few things in life that cannot be changed.

With sisters, you can be fighting like cats and dogs one minute or not speaking for months; let something happen and your sisters will be there at the drop of a hat. Sisters are always there when you need them.

Being the middle child of three girls, I felt like I was in the shadow of my sisters daily. We went through the same school system, rode the same bus, had the same issues with our parents. Some how, I man managed to feel over-shadowed by my older and younger sisters. Teachers, the bus driver and other school-related employees used to ask if I talked as much as my older sister. When I said, “No, I was the quiet one.” Their answer was always “Good”.

Kristie over-shadowed me when she was a freshman in high school. I had spent most of my junior year, sick and out of school. Upon returning my senior year, my baby sister took it upon herself to be my protector. She wouldn’t let anyone mess with me. Mrs. Gieger, the bus driver, said Kristie talked too much also. She told me once I was a nice break between my two sisters. 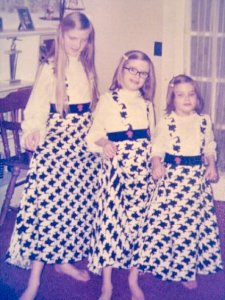 Stairsteps1- Jill and her sisters

2 thoughts on “Growing Up in the Shadows”